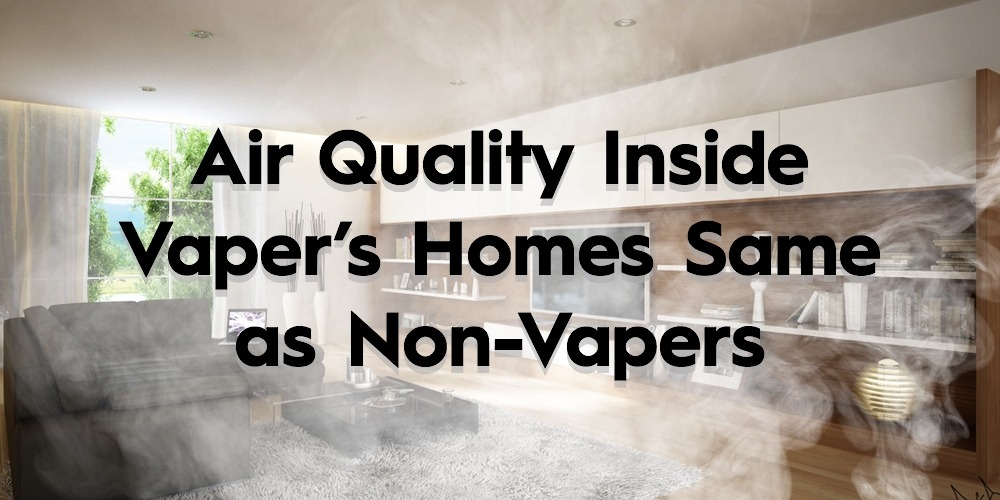 Smoking, Not Vaping, Proven to be a Major Home Pollutant

A study into the air quality of people's homes has shown that the air in a vaper’s home is just the same quality as that of a non-vaper's home.  But smoking did prove to be a major source of pollution, according to the study.

Scientists at the University of San Diego looked at 300 family homes in San Diego, all of which had at least one smoker and one child under age 14. Particle monitors were installed in two locations within each home. For three months, the monitors continuously scanned the household air for fine particles between 0.5 and 2.5 micrometres. The monitors then transmitted data to the scientists.

Twice as Many Dangerous Particles

Particles such as dust pollen, fungi and smoke are small enough to be inhaled deeply into the lungs causing respiratory problems.  In houses where there were smokers twice the levels of dangerous particulates were discovered during the study. Cigarettes were the biggest contributor to high particulate levels, but marijuana, candles, incense and household cleaners were also contributing factors.

But the scientists reported:  “We observed no apparent difference in the weekly mean particle distribution between 43 homes reporting any electronic cigarette usage and those reporting none.”

It's good news for vapers who are arguing for vaping to be allowed in public places.

The issue seems to have come full circle too.

Back in 2014, in a report on vaping, the World Health Organisation called for a complete ban on ecigarettes indoors over fears about passive vaping.

"The fact that ENDS exhaled aerosol contains on average lower levels of toxicants than the emissions from combusted tobacco does not mean that these levels are acceptable to involuntarily exposed bystanders,” said the report.

However, in its recent Tobacco Control Plan the UK government has said that ecigarettes should be promoted as a means to quit smoking.  There were also suggestions of a possible relaxing of the recently introduced EU's Tobacco Products Directive to allow vaping inside offices.