Bacon flavoured e-liquid is something we joke about among the community when folks mention having tried many different flavours and wanting to try something new. To tell the truth, I was extremely sceptical about the bacon flavour e-liquid as I wasn’t sure how you could bottle the delicious savoury flavour into a bottle of E-Liquid.

However, I’m willing to try to see what the fuss was about. I love menthol flavours so the bacon flavoured with a touch of menthol would be ideal for me. I was excited to try this flavouring as it could open more doors to other flavours such as chocolate bacon, banana bacon, and even waffles and bacon!

The e-liquid came in a 10ml plastic bottle with Vapemate’s logo and a child protective cap. The dropper bottle had a plastic needle-shaped nose. This is actually a nice touch in my opinion as a lot of vendors would rather cheap out and not get the thinner nose. Having a thinner dripper nose makes it easier to refill a tank or drip in an atomiser.

I was also extremely impressed with the amount of detail the label on the bottle had. It included the PG/VG ratio, nicotine level, name of the E-Liquid, and as well as several warnings as this is an adult-only item. Something a lot of vendors would be too lazy to do.

Alright, my initial smell of this bottle of eliquid is not a positive one. I was anticipating the fresh smell of bacon off of a girdle. I was reminiscing over weekend breakfast at a local dinner where the smell of fresh bacon is present even outside the restaurant.

However, my hopes were let down, unfortunately, instead of solid bacon sent I got a strong smoke scent instead. Think burning coals before putting meat over a grill. In a sense, it smelled like someone bottled smoke into a bottle of eliquid.

At a low wattage setting, the taste of this eliquid is smoky with a touch of menthol. It’s almost like a cigar without the bitter or sweet aftertaste. It’s very interesting. Not disgusting by any means. I do get the sense of bacon especially on the exhale but it’s not very strong. This definitely leaves a strong smokey after taste in my mouth as well.

For the cloud chasers out there, I did a high wattage test on this e-liquid as well. Definitely very smoky. Bacon is very present on the exhale now and the menthol is definitely strong. Imagine clearing your sinuses while getting a taste of bacon as well. Definitely makes it a more interesting vape for sure and outside my normal dessert or fruit-flavoured eliquids.

I ordered 100% VG ratio in the blackcurrant e-liquid. In fact, all my e-liquids will be 100% VG due to my PG allergy so your results may differ from mine if you order another ratio. The vapour production is definitely intense. Large plumes of vapour can definitely be achieved with this e-liquid.

This flavour is not my cup of tea, unfortunately. It’ll be fun once in a while to have this but I prefer my e-liquids very sweet and not so much savoury. It'll make a great gag gift for sure like the bacon-flavoured mints and gum they sell at speciality stores.

The menthol is definitely a nice touch and makes things much more interesting. But overall I really can’t see myself enjoying this flavour throughout the day. One last note though, be prepared to clean out your atomizer completely and replace your wicks/coils heads after using this flavour. The flavour is very strong and doesn’t go away easily. I had to wash my atomiser with soap three times before the flavour completely went away. 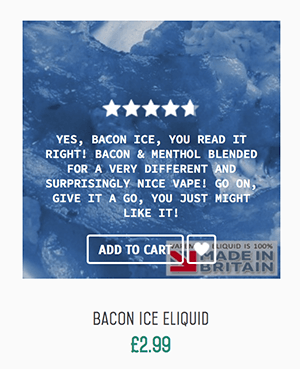