I’ll start by saying that here in the States; blackcurrant is not something that is well known. We know red grapes and white grapes but blackcurrant is neither a fruit that isn’t often carried at grocery stores nor something most Americans would think to buy. Fortunately, I grew up eating blackcurrant gummy candies when I was a child. It was a real treat for me considering they had to be specially bought at Asian grocery stores or ordered online. Needless to say, when I saw the blackcurrant eliquid option, I jumped at the opportunity to try it, and I must proclaim I do not regret my decision!

The E-Liquid came in a 10ml plastic bottle with Vapemate's logo and a child protective cap. The dropper bottle had a plastic needle-shaped nose. This is actually a nice touch in my opinion as a lot of vendors would rather cheap out and not get the thinner nose. Having a thinner dripper nose makes it easier to refill a tank or drip in an atomizer. I was also extremely impressed with the amount of detail the label on the bottle had. It included the PG/VG ratio, nicotine level, name of the E-Liquid, and as well as several warnings as this is an adult-only item. Something a lot of vendors would be too lazy to do.

Goodness gracious the E-Liquid smelled absolutely amazing. Upon the first sniff, it brought back childhood memories of dark-coloured soft candies my Mother bought for me. The smell was quite strong and there was no denying this was definitely a blackcurrant flavour no guess required here.

At a low wattage setting, the taste of this E-Liquid is sweet but not overwhelming. Definitely something you can enjoy all day long. I do get some hints of tart with the sweetness which is uncommon to find in any E-Liquid. It really does taste like blackcurrant candies rather than the fruit itself. Which is fine by me considering how fond I am of the candies. Throat hit on this flavour is definitely weaker than most, which is great considering I prefer a much smoother vape when vaping.

I ordered 100% VG ratio in the blackcurrant E-Liquid. In fact, all my E-Liquids will be 100% VG due to my PG allergy so your results may differ from mine if you order another ratio. The vapour production is definitely intense. Large plumes of vapour can definitely be achieved with this E-Liquid.

This flavour is a must-have! I cannot get enough of this flavour. While writing this review I’ve already gone through half the bottle! Even if you have never tried blackcurrant before, the flavour is very good. Sweet but not overbearing but yet a bit tart as well. I can definitely see myself using this flavour all day long without getting tired of it. I would like to add though since this flavour works better on lower wattages; look into getting the blackcurrant ice flavour as well. I can definitely tell a cooling agent to this flavour can make it twice as good without taking away from the flavour profile itself. 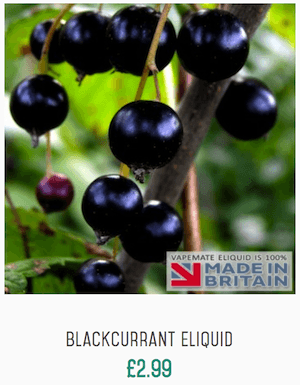