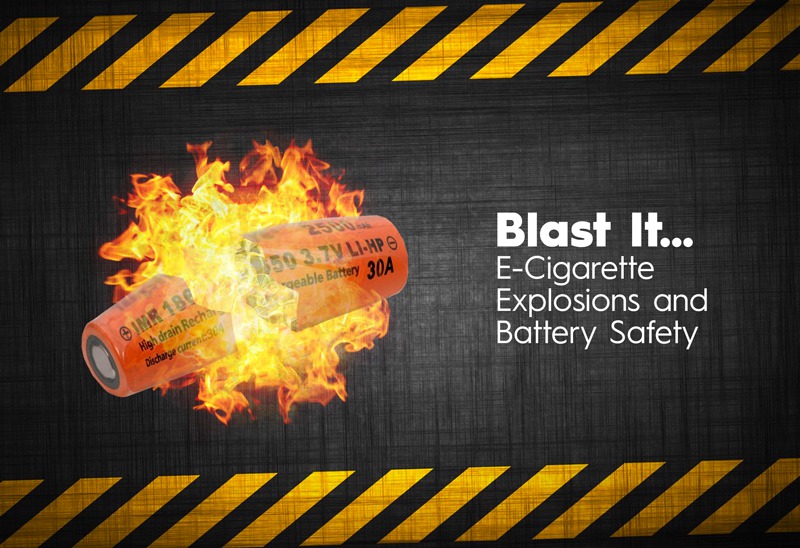 One of the Biggest Talking Points in the Vaping World at the Moment is Exploding Ecigarettes...

It's an issue that's everywhere.  America’s Food and Drug Administration has just set a date in April to discuss the issue, and there are almost daily reports about exploding e-cigarettes in the worldwide press.

No-one's denying that on occasion these devices do catch fire - website E-Cig One has reported 204 incidents globally of vape device battery fires between 2009 and 2016.  And in the current climate of distrust, it's great sensationalism for the media – it's certainly dramatic if a vape device goes off in a pocket. But there really is the potential for harm to you or someone nearby if a battery does catch fire.

But like all other evidence-gathering related to vaping, the studies of explosions are few, although much of the evidence points to the battery.  Or better put, a lack of respect for the battery that is sometimes teamed with modifications to the set-up without enough experience of Ohm’s Law.

Battery Fires Are Not New and It’s Not Just Ecigarettes

They hold incredible amounts of power, which is perfect for our lifestyle of phones, laptops and anything that requires power for extended periods.  Wireless headphones use Li-ion batteries.

Naturally, with anything this commonplace there is the potential for problems.  It’s pure maths. And so Lithium-ion battery recalls have taken place throughout history, the biggest being in 2006 when Sony recalled 9.5 million notebook batteries because of their fire risk.  Apple have recalled iPhone batteries, and even as this was being published Toshiba were recalling 81,000 Panasonic battery packs used in their laptops because of fire risk.  And of course, more recently Samsung recalled 2.5 million Galaxy Note 7 phones, which were banned from some American flights, because of their capacity to catch fire.

It mirrored a move last year by the International Civil Aviation Authority which banned the carrying of Lithium-ion batteries as cargo on any passenger flights. The risk is too great.

It’s Getting Hot in Here – The Thermal Runway

So why does venting happen?

Sometimes to the point of catching fire.

Often referred to as an ‘explosion’, when a vape device battery ruptures the venting is forced out of one end, where there is a weakness and the entire device can be propelled across the room.  Laptop batteries have a much more rigid case, and when they rupture tend to burn instead.

Things such as poor battery design and poor design between the fitting of battery and device, low-quality materials, natural manufacturing defects, and of course improper use can all create the circumstances for ‘thermal runaway’ to occur.

This issue goes well beyond vaping.

Obviously not all vape device explosions are reported but in an October 2014 study the US Federal Emergency Management Agency (FEMA) reported that 80% of the ecigarette fires occurred during charging, but only 8% while being used.

Also all of the incidents in the FEMA report used vape pens or similar – not the larger style devices.  There was also some evidence that using a USB port can increase the risk of an incorrect current being passed through the battery when charging.

You can take some measures though:

Most devices are regulated and have built-in safety features to prevent a battery overheating and venting.  However mechanical mods are custom-made and used by advanced vapers. It requires an expert level of knowledge to be used safely.

In mechanical mods all the battery’s power is delivered to the coil – the only way to affect this is through the resistance of the coil.  Therefore you need to understand the relationship between power, current, wattage and resistance – Ohm’s Law – to safely use these.

There is no safety cut-off and if the battery is pushed too far it can vent, leaking dangerous chemicals, possibly leading to an explosion.