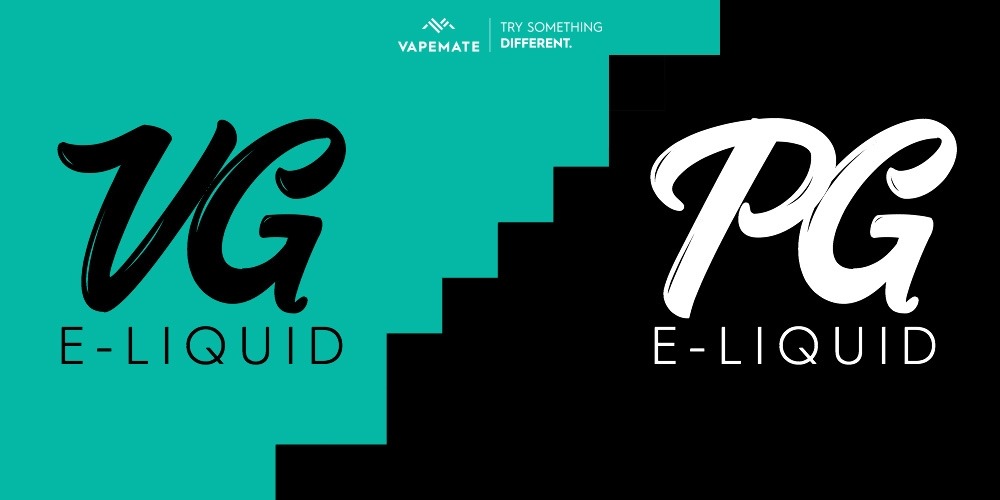 The two bases are mentioned all the time but what’s the difference between propylene glycol (PG) and vegetable glycerin (VG) e-liquid?

If you’re looking to make the switch to electronic cigarettes, you’re probably curious about the ingredients in e-liquid. Vaping terminology can be a bit confusing at first, so in this article, we will discuss how to choose between PG and VG e-liquid.

Vapemate and most other premium e-liquids contain these four main ingredients:

The base, or carrier, holds the nicotine and flavour in suspension so the e-cigarette or vaporizer can produce those sought-after clouds of water vapour.Both propylene glycol and vegetable glycerin are non-toxic organic compounds and generally considered safe for consumption by the FDA. In fact, they are widely used in the food and personal care industries as food additives.

For example, ketchup, one of the most popular sauces in the world includes propylene glycol as an ingredient.Now let’s break down PG and VG separately.

Let’s start with PG because it’s the most popular base.Thinner Consistency: Due to the fact that propylene glycol has a runny consistency, PG e-liquid is thinner than the VG variety, and is easily absorbed by the polyfill and cotton fabric inside cartomizers and wick tanks.Lower density: The low density of the juice also means that gunk doesn’t build up on the heating element of your vaporizer as fast as it does when thicker vegetable glycerin liquid is used.Has no flavour: Propylene glycol is a tasteless odourless substance, so it doesn’t alter the flavour of the e-liquid in any way.Hits the throat stronger: It’s also a powerful humectant, so while it will dry your mouth and throat if used consistently, PG also produces a stronger throat hit, similar to that of tobacco cigarettes.

If you have ever seen images or other vapers producing massive vape clouds, they are using e-liquids made from a VG base.Thicker consistency: Vegetable glycerin is a considerably thicker solution, compared to propylene glycol. It has a slower absorption rate for wicks and cartomizers. Bigger gunk build-up: Because of its thick consistency, VG tends to gunk up and clog vaporizers, requiring more cleaning.Has an effect on the flavour: On its own, VG has a slightly sweet taste which also makes the e-liquid sweeter and the flavours a little difficult to detect.Less throat hit: You also get less of a throat hit when using VG.More vapour: This tends to be the biggest reason why vapers use VG compared to PG as the base. Because of its thick consistency, VG e-liquids produce significantly more vapour and doesn't cause allergic reactions or irritations as often as propylene glycol.

How to choose between PG and VG E-liquid?

PG e-liquid tends to give you a better throat hit and a lot more flavour. On the other hand, VG e-liquid allows your atomizer to produce a lot more vapour for thicker and more impressive clouds.

The vaping community is evenly divided when it comes to e-liquid preference. One half enjoys the intense throat hits more than flavour and vapour, while the other half enjoys the sweet, thick plumes of vapour.

You are likely to find some e-liquids that combine both PG and VG together. If this is the case, the ratio is usually along the lines of 60 VG / 40 PG as this produces greater vapour and more flavour.

If you like, you can tend to use a mix of both PG and VG in particular ratios, such as 70 VG / 30 PG. This is the optimum ratio for most each uses as it provides a nice throat hit, good flavour as well as tons of vapour production.

Are PG and VG safe?

As we have seen by the ketchup example, both VG and PG are used in a variety of foods that are consumed on a daily basis and are deemed safe by the FDA, making them both safe to use.

It isn’t as simple as deciding on a high VG or PG vape juice and hoping for the best. It all comes down to your vape equipment. If it isn’t suitable for the job, it can lead to unpleasant throat irritation or wicking problems resulting in dry hits.Clearomizers

These are one of the most common styles of tanks for vaping, such as the Aspire Nautilus series. Clearomizers take higher resistance coils and are usually vaped below 15 watts.

They are not suitable for high VG fluids, as their coils cannot cope well with the thicker fluid.

If you are thinking of using a clearomizer, stick to PG.

Some of the best mods for vaping use sub-ohm tanks. Unlike clearomizers, sub-ohm tanks are much more capable of dealing with high VG juice. Requiring high battery strength, these tanks use up e-juice a lot quicker but make up for it with more intense flavours and better clouds.

If you prefer to make your own coils, you have a lot more flexibility on your e-liquid ratio. It still depends on the coils you use but you don’t have to worry as much about your cotton wicking properly. As always, the ratio boils down to personal preference, but the norm for coil resistances of premade coils works out the same for rebuildables – sub-ohm coils for high VG, higher resistance coils for 50/50 or high PG.

It really depends on what experience you’re after when it comes to choosing between PG and VG bases.