Should Non-Smokers Get More Time Off? 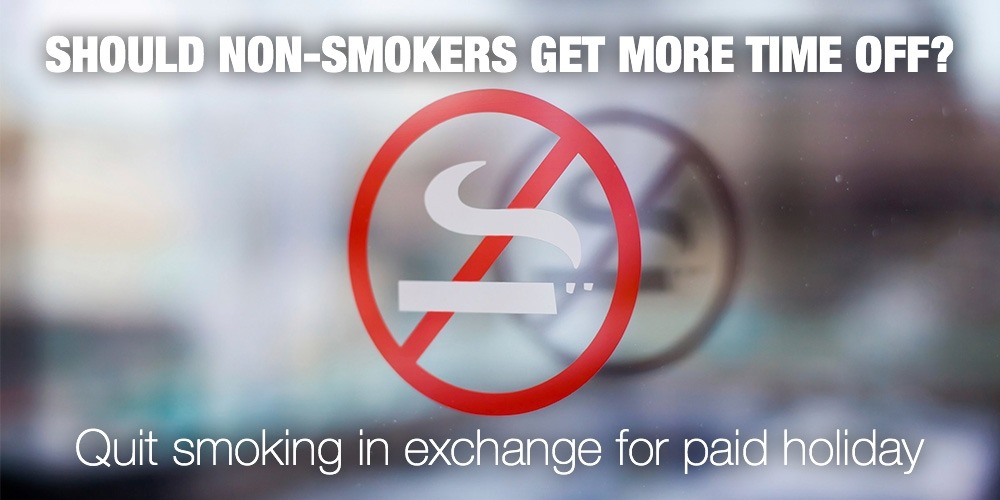 A recent study in the US showed that workers who take cigarette breaks have on average 6 extra days off each year.  And that reopened the debate – should non-smokers get extra time off to compensate?

Spokesman Hirotaka Matsushima, told the Daily Telegraph: "One of our non-smoking staff put a message in the company suggestion box earlier in the year saying that smoking breaks were causing problems."

The Telegraph reported: “Resentment among the non-smokers grew because the company's head office is on the 29th floor of an office block in the Ebisu district of Tokyo. Anyone wanting a cigarette had to go to the basement level, with each smoking break lasting around 15 minutes.”

And part of the company’s vision was to get people to quit smoking altogether.

20 Days Each Year From Smoking Breaks

More recently US ecigarette retailer Halo surveyed 1,000 Americans to understand their perceptions on the fairness of smoking breaks (for the full report visit www.halocigs.com/labs/trading-in-smoke-breaks).

The survey showed that by industry Americans in the technology industry, wholesale and retail, and finance and insurance spent more than an hour and 20 minutes each day on smoke breaks at work.

That came to more than 40 hours a month and more than 20 days every year for each industry.  In the UK the minimum holiday allowance is 28 days paid leave.

The survey also revealed that on average Americans would be willing to give up smoking for an extra 11 days holiday each year.  And while that seems like an excessive demand - after all shouldn’t everyone want to quit for their health’s sake – it costs the USA $156 billion in lost productivity due to smoking-related illnesses, with $5.6 billion of that coming from exposure to second-hand smoke, according to the report.  The full survey can be found at www.halocigs.com/labs/trading-in-smoke-breaks.

The question arises, however, if you switch to vaping from smoking does that count as non-smoking in this context?