The Positive Effects of Nicotine 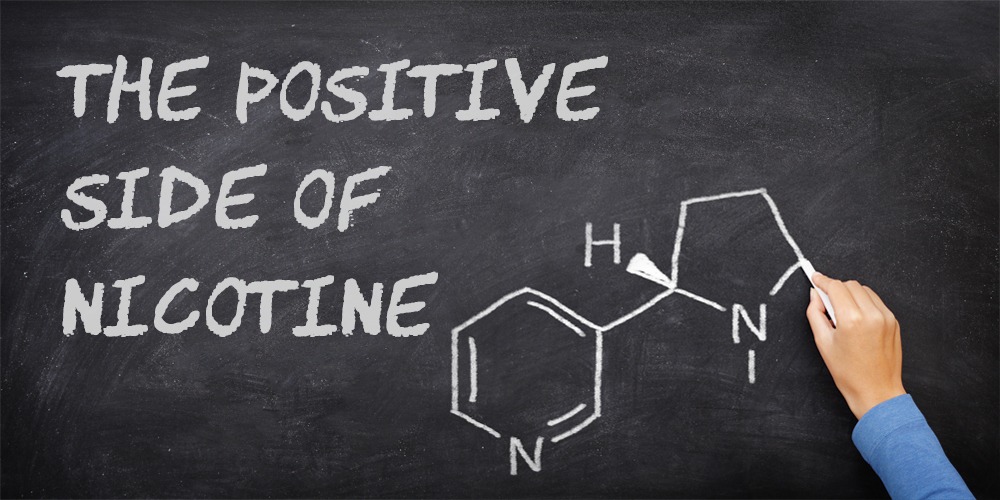 Can Nicotine Have a Positive Benefit?

Remember Michael Russell’s quote from the 70s? He famously said that people smoke for the nicotine, but die from the tar…

But without smoke is nicotine so harmful?  It’s a constantly asked question and tested theory.  And recently studies showed that nicotine can actually help with depression in later life.  Where regular anti-depressants don't work in older patients, nicotine has been shown to have a therapeutic effect.

The study by scientists at Vanderbilt University showed that “Both preclinical and preliminary clinical studies suggest that nAChR agonists (such as nicotine) can improve depressive behaviour in animal models and improve mood in depressed individuals. Substantial literature also supports that nAChR agonists benefit cognitive performance, particularly in older populations.”

Nicotine is thought to stimulate dopamine and serotonin, both lacking in people with depression.

So What are Other Positives of Nicotine

There are a few.  Proven, too.  And there’s also one or two misconceptions about nicotine…  it’s not cancer-causing and, alone, it’s addiction potential is virtually nil.  It is instead nicotine’s preferred method of delivery, smoking, that causes a particularly deadly combination.

Furthermore in tests nicotine has shown positive results in delaying the onset of Alzheimer’s and reducing the disease’s symptoms thanks to its neuroprotective effect. In the same way, nicotine has also been shown to reduce the symptoms of Schizophrenia.

It was by chance that the link between Parkinson’s and Alzheimer’s was discovered. In 1966 Harold Khan, while looking at insurance data, found that non-smokers were three times more likely to develop Parkinson’s disease than smokers.  Initially, it was thought to be caused by smokers’ premature death rate, typically occurring before the age Parkinson’s starts to develop.  Four years later a study in Baltimore proved Khan’s theory.

Nicotine is very similar to acetylcholine, a neurotransmitter that acts in different ways inside the brain to help control things including muscle movement. More tests have shown that nicotine helps reduce the damage to neurons, therefore slowing down the onset of Parkinson’s disease.

Tourettes Syndrome and Nicotine as an Anti-Inflammatory

In the same way, nicotine reduces tics and tremors in people with Parkinson’s Disease, it was proven to help those with Tourette’s syndrome.

But the anti-inflammatory properties don't end there. Not only does nicotine act as an anti-inflammatory on neurons in the brain, but it can also reduce the inflammation associated with Crohn's disease and other inflammatory bowel diseases, particularly Ulcerative Colitis.

Weight gain has been a barrier for some people quitting cigarettes and smokers have shown to generally have a lower body weight than non-smokers.  Now research is looking at delivering nicotine solutions to counter obesity, without the harmful effects that come with smoking.

...But That’s Not to Say Nicotine is Without Risk

It’s been shown to lower blood pressure, which can be harmful in people with blood pressure issues.  Nicotine is also a very strong promoter of increased capillary blood vessel growth -  bad in the case of tumours.  Here nicotine has been shown to increase tumour growth in colon, pancreas, breast, larynx, and lung cancers.

The world's favourite way of getting nicotine is through smoking.  Inhaling smoke is faster than any other nicotine delivery system, it's almost instant. Smoke particles are one micron in size – that’s 1/1000th of a millimetre.  And your lungs have millions of tiny air sacs called Alveoli, which easily absorb these tiny smoke particles, and this causes smoking to be so effective as a nicotine delivery system. But as we know smoking comes with around 6,000 other chemicals that are prepared to harm you.

The many studies on nicotine delivery from a cigarette have shown smoking to provide very reliable and consistent amounts of nicotine too.  Vaping with e liquid is a little less sure of itself, and other elements – e juice or e liquid flavour concentrate quality, wicking material – come into play too.  Vapour also doesn't penetrate the body as deeply as smoke, so you need more vapour to get the same effects from the nicotine.

But vaping is the alternative favourite way of getting nicotine. And with a range of DIY e liquid available, with e liquid concentrates ready to take a concentrated nicotine shot, vaping could become the best way to get it.

Science is still debating everything, but one thing is for sure – the debate on nicotine itself is definitely underway.