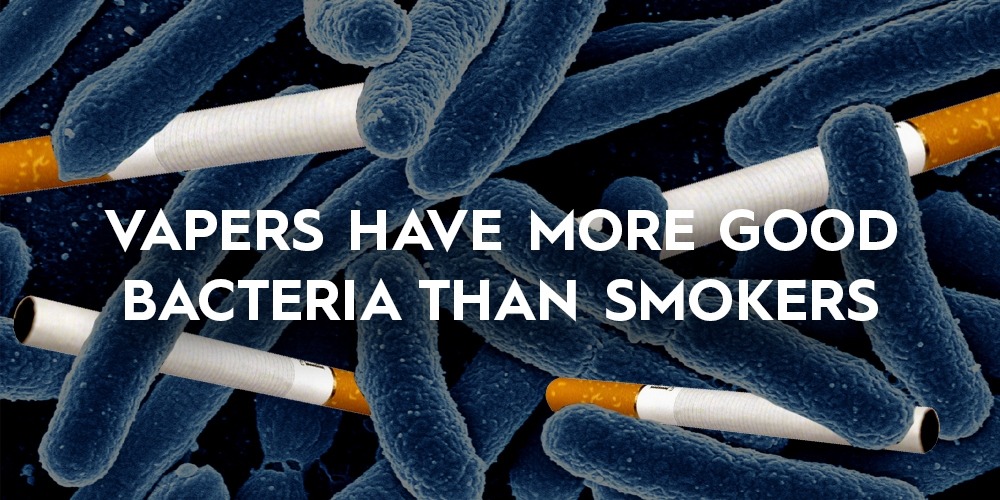 Vape is Less Damaging to Bacteria of the Gut

Vapers have more good bacteria than smokers, and vaping is less damaging to the bacteria of the gut according to a recent study.

And the study also found that vaper's microbiomes were at similar levels as those of non-smokers.  Scientists have said that it’s a good incentive to switch to ecigarettes. On the other hand, smokers have diminished gut microbiome, meaning they'll be more susceptible to disease.

For the findings, 30 people were tested - 10 each of non-smokers, smokers and ecigarette users.  Saliva, faecal samples and buccal samples were taken from each and analysed.

The results showed that the bacteria levels in smokers were different from those of non-smokers and vapers.

The study, published in the Daily Mail, also showed that smokers had lower levels of Bacteroides, which is linked to Crohn’s Disease and obesity. There was also an increase in Prevotella bacteria which is linked to increased risk of colon cancer and colitis.

He said: "The bacterial cells in our body outnumber our own human cells and our microbiome weighs more than our brain, yet we are only just beginning to understand its importance on our health.

Incentive to Change to E-cigarettes

"More investigation is needed but to find that vaping is less-damaging than smoking on our gut bacteria adds to the incentive to change to ecigarettes and for people to use them as a tool to quit smoking completely.”

The study was the first of its kind.  The microbiome environment is now considered hugely important in relation to the health of humans.

Dr Stewart said: "This research comes as we see a huge increase in the numbers of people using electronic cigarettes and it becomes increasingly important that we understand the effect on the human body."