Vaping and Your Teeth - Does Vaping Stain Your Teeth? 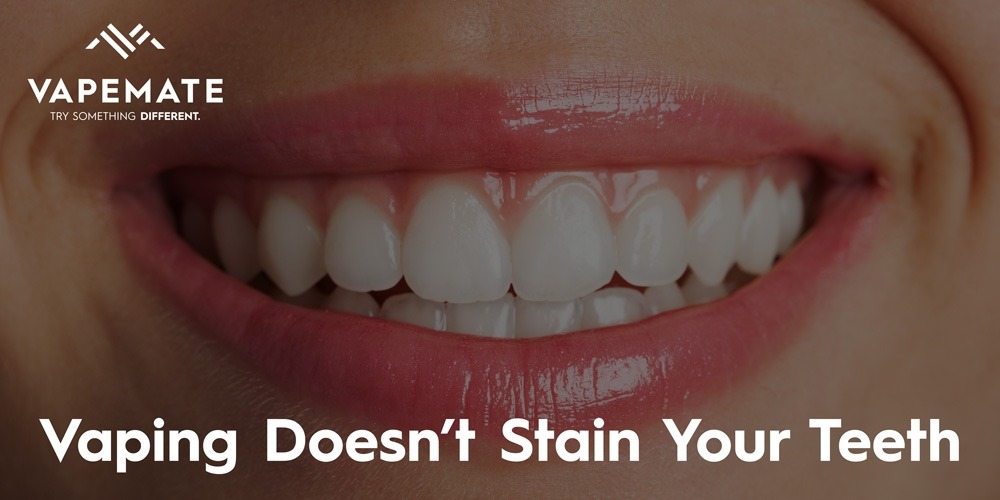 Whether it's standard vape or your own e liquid concentrates the results of a recent study have shown that ecigarettes don’t stain your teeth as regular smoking does.

Teeth exposed to cigarette smoke over a two-week period became quickly discoloured, while those exposed to eliquid vapour from an e cigarette had almost no additional levels of discolouration compared to teeth that had not been exposed.   It was the tar however that caused the discolouration, not the nicotine.

The study, made by British American Tobacco, was made part of a wider look at the effects of vaping on oral health, using cows teeth which closely resemble human teeth, and presented at the annual conference of the American Association for Dental Research in Florida in March 2018.

But is Vaping Bad for Your Teeth?

Vaping has been shown to be better for smokers’ lungs but how does vapour affect your oral health?

E liquid vapour produces nothing like the number of chemicals found in cigarettes (cigarettes have around 6,000 chemicals designed to improve flavour and increase addictiveness) and Public Health England have deemed it 95% safer than smoking.

But dentists do say there are some concerns with regards to vaping or more specifically using e juice with nicotine and vaping effects on teeth.

Nicotine can reduce blood flow to the gums and soft tissues of the mouth and can cause the gums to recede. This reduced blood circulation also prevents the mouth’s ability to fight against bacteria causing infection to be sped up.

But in reality, there’s just not enough data to say for sure what happens.  While nicotine does constrict blood vessels, there is some argument that smoking lowers blood pressure, therefore rendering restricted blood vessels no problem for gums.

Smoking does, however, carry a much higher risk of general immunity problems which can lead to oral health problems, including bad breath and gum disease.  Smoking also carries with it a greatly increased risk of oral cancer.

One study looked at the general health of smokers and those who used ecigarettes.  The results were published in Medicine journal in December 2017.

“At the end of the study, we registered a progressive improvement in the periodontal indexes, as well as in the general health perception. Finally, many patients reported an interesting reduction in the need to smoke.

In light of this pilot study, the e-cigarette can be considered as a valuable alternative to tobacco cigarettes, but with a positive impact on periodontal and general health status.”

But not all vape has to contain nicotine. There's always the option to vape a 0mg nicotine eliquid, or blend your own with some e liquid flavour concentrates, where adding nicotine is entirely your choice.

If you vape the advice is straight forward; there are bigger things to worry about when it comes to smoking; your heart, your lungs, diseases... so make sure you stay hydrated and brush well.