How Do E Cigarettes Work?

If you’re new to e-cigarettes and vape mods or just want to know more, our handy guide explains the basic functions of an e-cigarette, the different parts and helps you better understand the variety of vaping devices available.

The Different Parts of an E-Cigarette

An e-cigarette is made up of:

How Do Vapes Work?

The rest of this guide looks at each component of an e-cig in more detail.

Most ecigarette batteries are lithium ion and rechargeable. Lithium ion batteries are widely used, for example you’ll find them in laptops, and wireless devices. However, you will find some basic devices are disposable and once the eliquid is used up you discard the ecigarette. Some devices, depending on the type of power you require, take up to four batteries.

Battery strength is measured in mAh (milliampere hours). The higher the mAh value, the longer the battery will last between charges.

Batteries carry a risk of fire. You should always use a case for carrying spare batteries. If batteries are loose in your pocket and they come into contact with other metal objects – keys or coins for example – they can discharge and catch fire.

Always use the correct charger too. Nearly all ecigarette battery fires are caused by user modifications without proper understanding of power or by using an unsuitable charger.

Some batteries carry the risk of fire if the charge drops too low. Always follow the manufacturer’s guidelines.

The atomiser is the part of an ecigarette that turns the eliquid into vapour. It’s the unit that houses the coil – the metal wire that heats up when the current from the battery is passed through. Usually there is a wicking material running through the coil, which is saturated with eliquid. The wick feeds eliquid to the coil.

Coils will need to be replaced and pre-built coils are available, but some vapers prefer to build their own. Coils are usually categorised by the metal they’re made from, usually stainless steel, nickel, or titanium. Each metal has its own temperature and wattage tolerances – which will vary again based on the manufacturer or type of e-liquid being used. 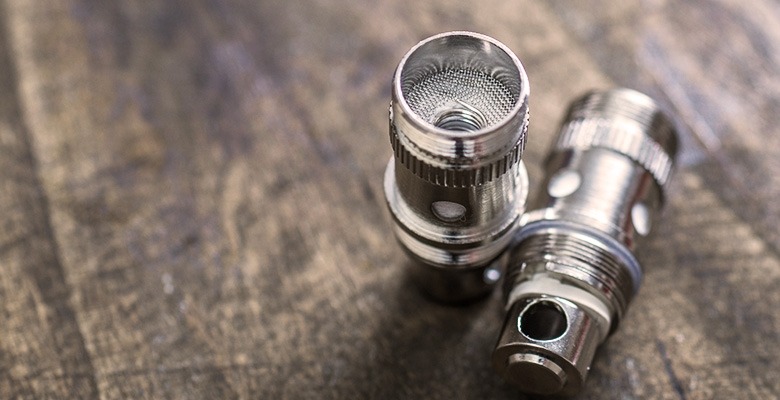 Great for DIY’ers, rebuildable atomisers (RBAs) allow you to take the coil apart and replace the coil inside, rather than chucking out the whole heating element when it reaches the end of its life.

Rebuildable dripping atomisers (RDAs) rely on the user to drip fresh e-liquid on the cotton wick, eliminating the need for a separate tank. The wick and coils are accessible from the mouthpiece, with only a small space between the point where vapour is produced and the point where it is inhaled.

RDAs create enhanced flavour. They also accommodate customisation by letting users replace the coil and cotton wick inside the heating element with brands and accessories they select themselves. Different coil material produces different resistance from the battery and more or less cloud and heat.

The Cartridge, Cartomiser or Clearomiser

Your eliquid needs a home. Depending on the type of ecigarette it will have a tank element known as a cartridge, cartomiser or clearomiser. They all essentially fulfil the same function - to store eliquid and supply it to the coil. 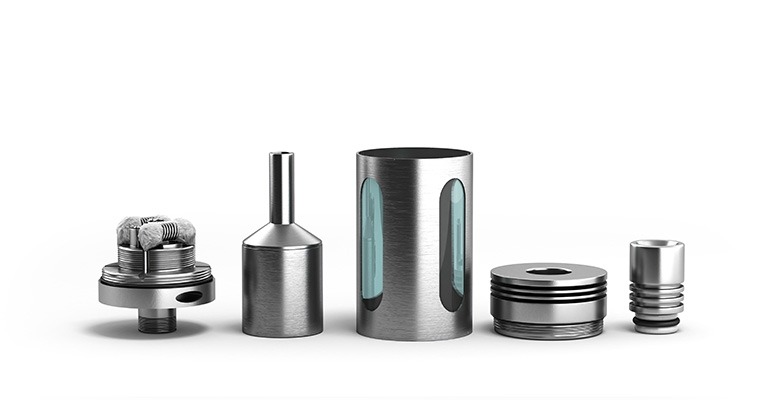 Usually found in a simple cig-alike device the cartridge slots onto the atomiser and feeds the eliquid to the heating element, like an ink cartridge feeds the nib of an ink pen. Once it’s empty you put a new cartridge in place. The lifespan of the atomiser varies depending on build quality and usage but users will usually get between 5 and 20 cartridge changes before the atomiser is spent.

A cartomiser is similar but contains a polyfill material wrapped around the heating element. The eliquid is soaked into the polyfill and is easily refilled, but previous flavours can linger. helps extend the life of the eliquid, and some cartomisers are housed inside large tanks capable of holding a high volume of eliquid.

A clearomiser is an atomiser inside a container holding eliquid, which is transferred to the coil via the wick. To most users it is simply the ‘tank’ – and these get their ‘Clearomiser’ name because they are made with a transparent plastic or glass material, where you can see exactly how much eliquid remains.

The coils in clearomisers are designed to be replaced and can be positioned differently inside the tank:

Sub-ohm tanks offer a straightforward all-in-one option for vaping with a mod. They can be filled with several millilitres of e-juice and screwed directly into an atomiser base unit with a replaceable coil. The juice soaks into a cotton wick wrapped around the heating coil. Combining the tank-and-atomiser makes them very easy to use – a zero-fuss way to replace the coils and refill the tank. Sub-ohm refers to the coil’s current resistance. Sub-ohm mods produce a strong flavour and a volume of vapour, making them an obvious step change for anyone trading up from disposables.

Your final vape depends on the power of your device, the type of eliquid you choose to vape (for example a higher VG blend will need more power).