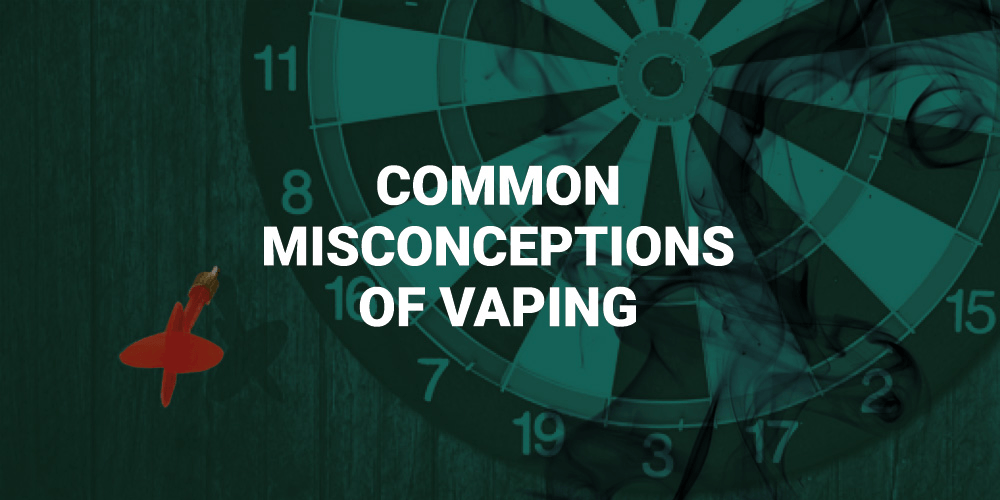 Vaping has become an increasingly popular alternative to smoking but since becoming more mainstream, more questions are being asked.

There are so many claims being made about vaping and this post is going to be confronting a few of them head-on.

Vaping is Just as Bad for you as Smoking Cigarettes

First off, a cigarette is made up of thousands of chemicals, of which 69 have been proven to develop symptoms of cancer.  Such ingredients include nicotine, tar, carbon monoxide and DDT.

Nicotine is very addictive and is the reason why people get hooked on cigarettes.  Smoking a cigarette fills up your lungs, meaning that the nicotine reaches your brain incredibly quickly and releases dopamine to make you feel good.  Regular smoking ends up making you relying on a cigarette to feel normal.

When you inhale from smoking a cigarette, tar gets released into your lungs.  The more you smoke on a single stick, the more tar you put into your lungs. Tar remains in your lungs and creates a mesh of chemicals, one of which is carbon monoxide.  This restricts the amount of oxygen that can be carried around the body.

The more you smoke, the more of these toxic chemicals you ingest into your system and can cause a lot of long term damage to your body.

E-cigs, on the other hand, use e-liquids to get the nicotine into the body.  A typical e-liquid contains water, the flavouring, nicotine, propylene glycol, which is also used in asthma inhalers so non-toxic, and glycerine, also not toxic.

So as we can see, smoking is a lot more dangerous than vaping.

Vaping is More Addictive than Cigarettes

This is just false.

Vapers have the ability to modify their e-cigs meaning that they can choose how much nicotine they want in a bottle of e-liquid.  Further to this, there are also nicotine-free e-liquids available to buy meaning that it would be impossible to get more addicted to these than cigarettes.

Going back to the previous point, we can also see that vape juice contains far, far less harmful ingredients than regular cigarettes.  Tobacco based sticks have many chemicals that are cancerous whereas was can see that there are no such type of ingredients in an e-cigarette.

Vaping was originally created as a healthier alternative to smoking.  The health risks around smoking are so well known now that it is impossible to start without being aware of them.  With this in mind, e-cigarettes wouldn’t even be legally allowed in the modern-day. With all the research that has gone into smoking and its effects, there is no way they would be allowed if they really were as bad as cigarettes.

Take a look at this study taken by the Penn State College of Medicine.

Another discovery from the study found that 90% of the group using normal cigarettes were nervous or irritable if they couldn’t smoke, compared to only 25% of the e-cig users.

Overall the study goes to show that vaping is less addictive than smoking.

E-cigarettes are Not Regulated

This is not true in the slightest.  In fact, the UK has some of the toughest laws against smoking and vaping in the entire world.

All e-cigs must comply with the Tobacco and Related Products Regulations 2016.  This defines all the minimum standards all e-cigs must follow in order to be sold.  Examples include what can be included in the e-liquid and what can be displayed on the packaging.

The whole point of the regulations is to make customers aware of what they are buying so everything they purchase is legitimate.

Further to this, the EU’s Tobacco Products Directive came into effect last year in 2017.  It states that there can only be a maximum amount of nicotine in a bottle of e-liquid and that bottle cannot ever contain more than 10ml of liquid.

Finally, all e-cigarettes in the UK must be registered with MHRA ie the Medicines and Healthcare products Regulatory Agency.

This is more than enough to show e-cigarettes are regulated in the UK.

This is a vaping myth.

The reason why people sometimes associate e-cigs and antifreeze is because e-liquids contain propylene glycol.

This is sometimes used in antifreeze but only as an extra ingredient to prevent any toxic damage being done to someone who accidentally ingested it into the body.

There is no reason why an e-liquid manufacturer would include this ingredient in their product.  The only thing they would gain would be a lot of trouble with the authorities.

The chemical that is actually used in antifreeze is similar in name but far more harmful if you get it into the body.  It is called ethylene glycol.

So no, e-liquids do not contain antifreeze.

As we know from our article looking directly at vaping vs smoking costs, this is simply not true.

Smoking can end up costing thousands whereas switching to vaping can save you enough money to use on a holiday or a new car!  Check it out for yourselves.

Vaping is far less dangerous and addictive to you than tobacco cigarettes, e-cigs do not contain antifreeze and they are indeed regulated heavily.

Hopefully, we have managed to put to bed a few of the major vaping myths.  You should now have a better idea of the difference between vaping and smoking and clearly see why vaping is by far the healthier and safer alternative.